ENBIO’s CoBlast process allows the surface functionality of metals to be transformed in a single processing operation. CoBlast is a clean, one-step coating technology that can match the performance of traditional multi-step, wet chemistry surface treatments that rely on the use of hazardous materials (e.g. acids, chromates, etc.).

The global aerospace sector is due to grow significantly over the next 15 years and will be valued at approximately $4.14tr. It is estimated that during this time, over 56,000 new civil aircraft will be produced. While the aerospace industry is often at the forefront of technology and innovation, it still relies on traditional wet chemistry techniques to functionalize a metals surface prior to assembly.

This will lead to two key challenges that the aerospace will have to overcome. Firstly, this increased production will put significant strain on the current capability of metal finishers that rely on multi-step surface treatments. Secondly, REACH regulations will eventually restrict the use of the hazardous chemicals that are currently in use and the industry relies on.

ENBIO envisage CoBlast as solving these two challenges at once. Firstly, CoBlast is a clean, dry one-step process that does not rely on hazardous materials. Not only will this allow the chemical baths to be removed from current production processes, but the auxiliary equipment needed to treat the waste water will also be obsolete. The potential environment impact could revolution the aerospace coatings industry. Secondly, current aerospace surface treatments represent a bottleneck in the production of aircraft. When the CoBlast process begins to scale-up, ENBIO will have the ability to coat large components in a one-step process with comparable speed to current grit-blasting technologies.

ENBIO have already applied our CoBlast process to multiple aerospace applications. For example, Figure 1 shown comparable lap-shear strength of an aerospace grade film adhesive bonded to a CoBlast Primer versus the industry standard (chromic acid anodization + primer). This was achieved without the need for hazardous materials. Figure 2 shows that certain CoBlast coatings can also be used as corrosion inhibiting primers. In this example, a CoBlast ‘Skin’ was used as a primer for a clear, two-pack epoxy paint. Compared to the zinc plated coupon, the CoBlast primer performed significantly better with little delamination of the epoxy paint layer. To illustrate the versatility of the CoBlast process, it can also be used to deposit a non-stick PTFE coating. Figure 3 shows a film adhesive peeling off a steel substrate with a PTFE ‘Skin’. ENBIO are developing this coating for mould release, anti-fouling and low-friction applications. 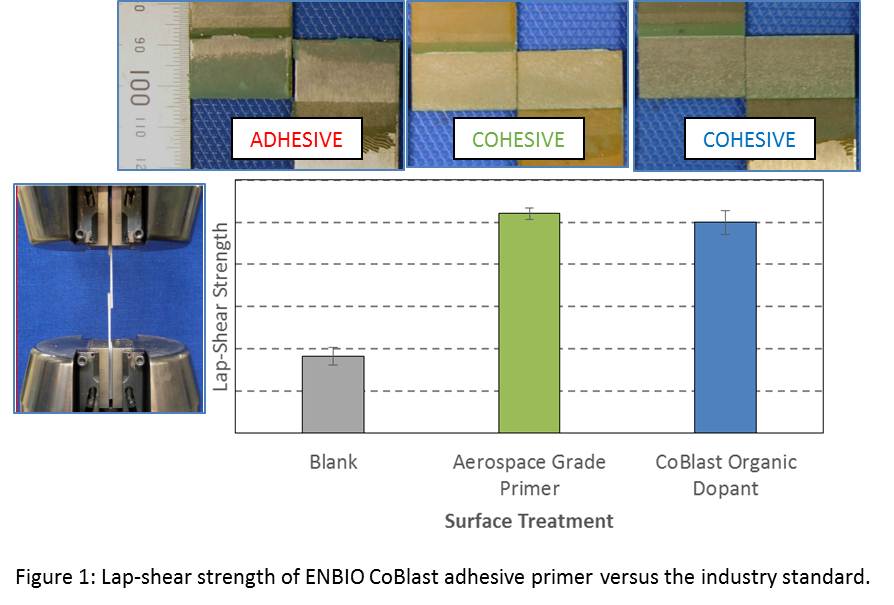 Back to News Articles

This website uses cookies to improve your experience while you navigate through the website. Out of these, the cookies that are categorized as necessary are stored on your browser as they are essential for the working of basic functionalities of the website. We also use third-party cookies that help us analyze and understand how you use this website. These cookies will be stored in your browser only with your consent. You also have the option to opt-out of these cookies. But opting out of some of these cookies may affect your browsing experience.
Necessary Always Enabled

Any cookies that may not be particularly necessary for the website to function and is used specifically to collect user personal data via analytics, ads, other embedded contents are termed as non-necessary cookies. It is mandatory to procure user consent prior to running these cookies on your website.